“Human rights are not an internal matter”

Youth organizations also affected by arrests and Repression in Belarus. In Belarus the repression of the Lukashenko regime is increasing. More than 10 000 of people have now been arrested and sentenced in so-call trials. There are alarming facts on rapes, severe beatings, in order to access data in personal phone and reports of torture in prisons. This also aaffects the activists of youth organisations.

IJAB spoke to Lavon Marozau, the international secretary of RADA, the umbrella organization of independent youth organisations, about the current situation. 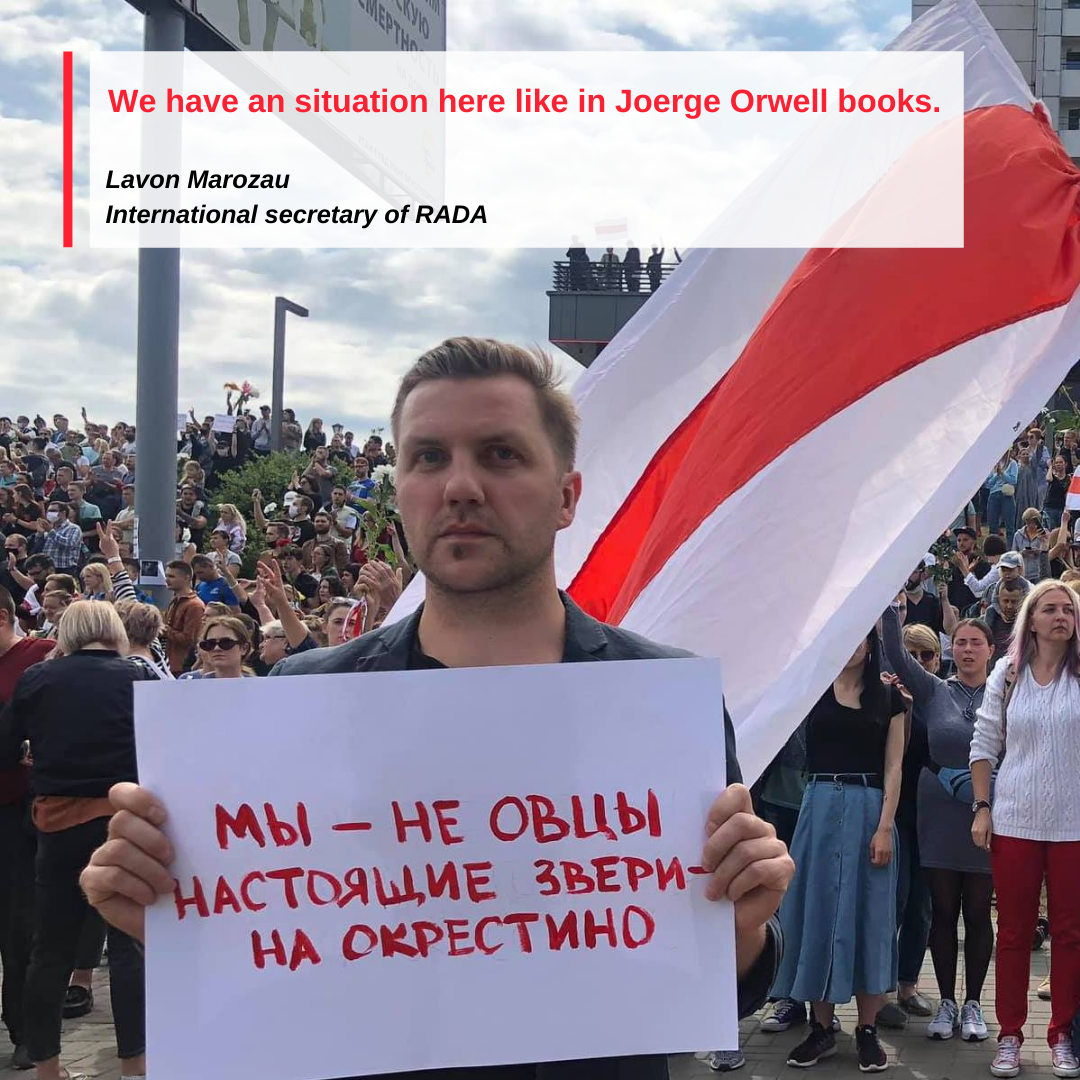 ijab.de: Lavon, what are you responsible for as RADA’s international secretary?

Lavon Marozau: I take care of our international contacts and projects and those of our member organizations. This also includes our membership in the European Youth Forum and participation on EU-Belarus roudtable meetings. An important focus of RADA is the youth rights situation in Belarus. RADA reported on the youth rights to UN Human Righst Council, I will personally present the Universal Periodic Review (UPR) report on behalf of RADA team in October 2020. This year we developed a Resolution against the death penalty in Belarus and will present it at the European Youth Forum.

ijab.de: Thousands of people have been arrested in connection with the protests against the fake presidential election in Belarus. Has that affected RADA and its member organizations as well?

Lavon Marozau: Yes, Irina Sukhy is the member of “Ecohome” Council (“Ecohome” is a member of Belarusian National Youth Council RADA), the founder and leader of the environmental movement in Belarus, an outstanding leader of the civil society movement in Belarus was arrested and sentenced to prison. She was already released. Stanislava Gusakova — member of the Board of the Belarusian National Youth Council “RADA” in 2017-2019 also was arrested and sentenced to prison. Today was released. And one of our current board members, Uladzimer Bulauski was also arrested and sentenced. We do not yet know the details of his trial, but we will follow the trials and report on our website whether they were fair or not. Our experience so far tells us: these court hearings are a circus, but nothing that has anything to do with international legal standards. Activists from our member organizations are also affected by the arrests.

ijab.de: State propaganda and Lukashenko say the protests are controlled from abroad. Sometimes Poland, Lithuania, Germany, the EU or NATO are mentioned. Are you as an organization that has many contacts in western countries in particular danger?

Lavon Marozau: We laugh at such reports — it is time for the previous president to hire a new screenwriter. Every election is the same — there are enemies everywhere.

We know these propaganda stories from all elections. There is constant talk of influence from abroad. Sometimes it’s Russian mercenaries, sometimes it’s Ukrainian nationalists who are said to be involved. Only people who trust state television can believe that. But people have long had access to other news sources through the Internet. We’re talking about a Telegram revolution. [Telegram is a popular messenger service, editor’s note.]

Yes, of course we are scared. When I report on human rights, for example the fact that we still have the death penalty here, I feel like an enemy of the state. When I spoke to the university administration (Lavon worked as a Lecturer on Human Rights and International Law at one of belarusian university. In 2016, he was visited by people from the KGB and lost his job. Now he teaches International Law sometimes abroad.), I feel like an enemy of the state. That is absurd. We have an situation here like in Joerge Orwell books.

ijab.de: What has to change in international relations in the near future?

Lavon Marozau: We need more effective EU and other countries measures. It must clearly identify human rights violations and respond to the crimes that are being committed here. We call for an end to the official partnerships. We also need economic support. Putin recently paid Lukashenko 1.5 billion to save his regime. But Putin is not Superman either and cannot just buy the country. It is essential to establish an international commission that investigates all acts of torture, ill-treatment and murder in Belarus.

We need a visa free regime for those arrested and tortured. The world needs to understand that human rights are not an internal issue of any single country. The world must be openly talk about what is happening here and not watch Belarus develop into a second Yugoslavia or Ukraine.

ijab.de: What can civil society in Europe, in Germany, do to support you?

Lavon Marozau: We have good relations with Europe and Germany. Nevertheless, our relationships with youth organisations could be closer and we would be happy to see more joint projects in future.

Many people don’t understand how we are living here right now. The police can come at 5 a.m. — without uniform or ID cards — and arrest us. I know many who swallow pills or drink some alcohol just to get any sleep. Please don’t always ask us what you can do. We’ve got our hands full here, raising money, paying fines at trial, or talking to lawyers. Just do something! You can send protest letters to the embassies of Belarus in your countries. You can report what is happening in the media you have. We feel all your support! See you in free and decocratic Belarus. 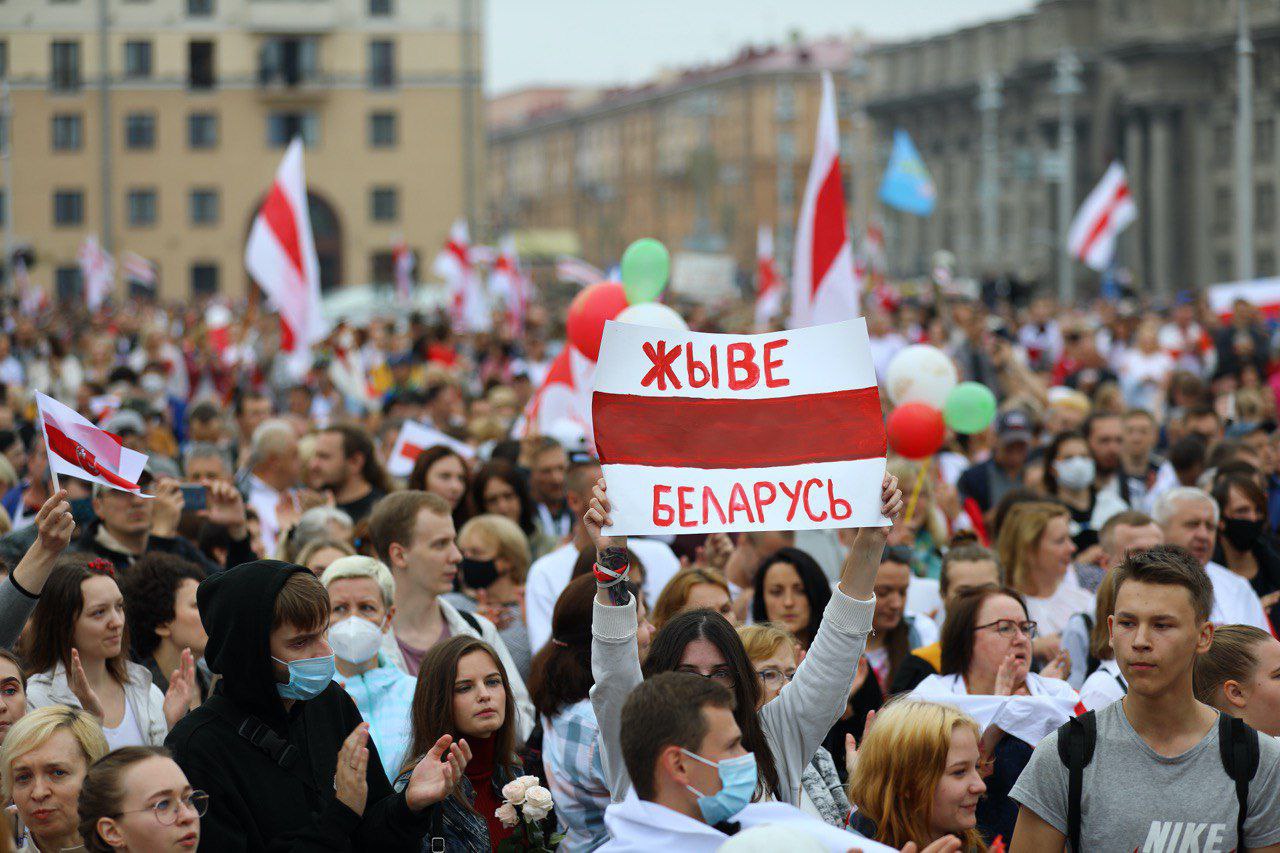 1-month project with the best experts in the fields of International Relations and diplomacy.

The YO!Fest is the annual political, musical, youth-led festival of the European Youth Forum.

Representatives of RADA took part in a panel discussion on human rights and the shrinking space in Belarus.