How Irina Sukhy was tried? 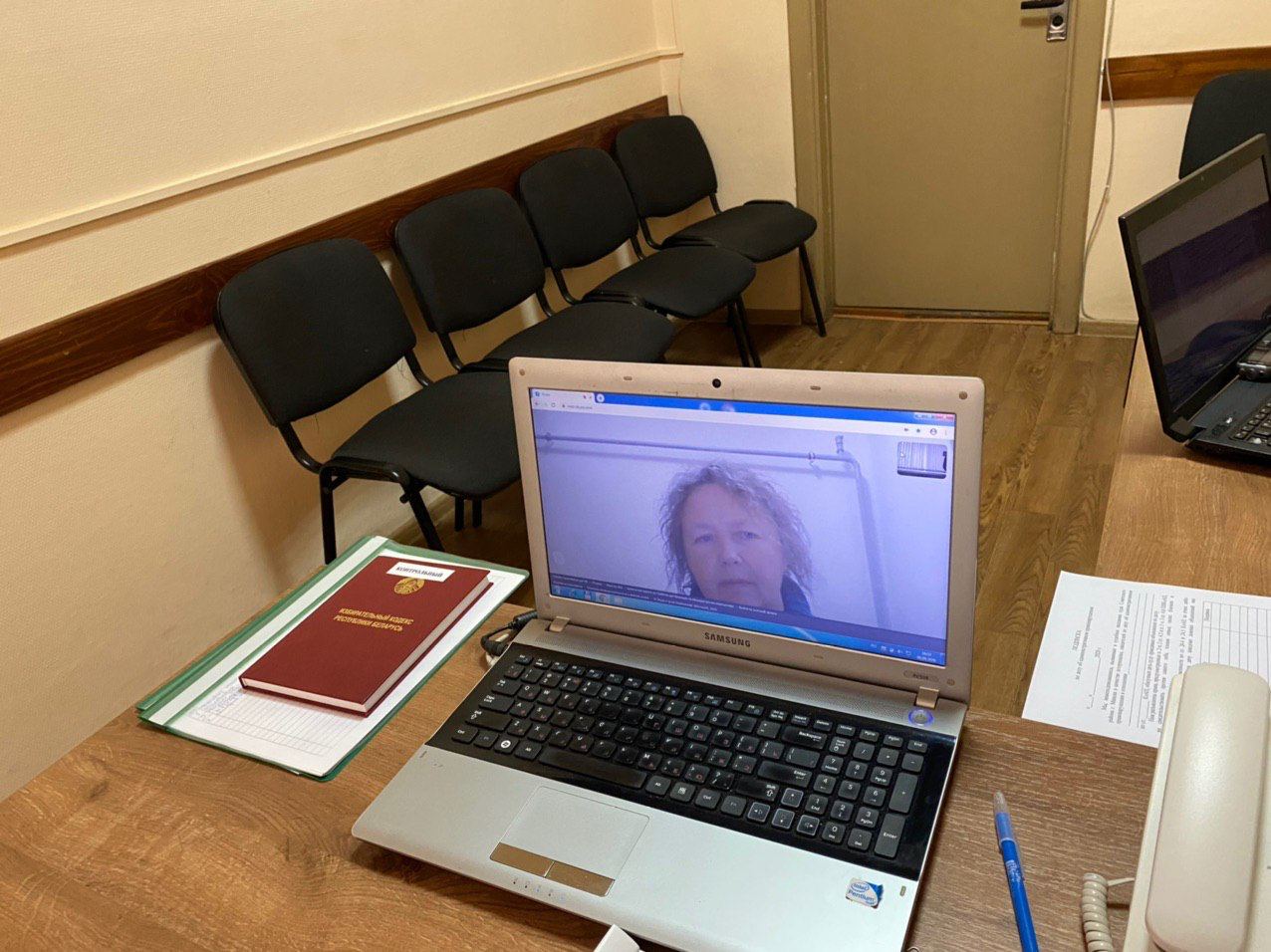 On September 6, 2020, at about 2 pm, she was detained in Minsk. To an apartment in the center of Minsk, where Irina lives with her mother (Margarita Filippovna is a former teacher of the Institute of National Economy, she is 94 years old), her daughter Anna, who brilliantly defended her diploma in architecture in Prague and returned to Belarus a month ago.

The masked men did not bother to introduce themselves and show their documents, but were going to break down the door.

Irina opened the door and, at the first request of three “specially trained” people, was presumably taken to the Sovetsky District police department.

The masked men said they would take her to the department to verify the circumstances of her participation in the peaceful protest on September 3, 2020. Irina did not take part in the actions on September 3, 2020 and was far from Minsk with friends and relatives.

Irina Sukhy’s daughters came straight to the apartment of their mother and grandmother. The eldest daughter Sonya was thrown out the door with the words that “she is not registered here.” The youngest daughter Anna was unable to access the search (inspection) and seizure of property. Those who carried out the search explained that Anna had no right to do this, since she could not prove her relationship with her grandmother. The search (examination) was carried out without witnesses. Computer equipment, storage media (flash drives and an internet router) were taken from the house.

When detained from the house, Irina was told that there was no need to take things. She asked that if she was being taken to the pre-trial detention center in Akrestino, she had to collect the elementary things with her (water, personal hygiene items), she was told that there was no need for this. They said that they were being taken exclusively for a conversation at the police. Irina was not released.

On the morning of September 7, 2020 Sonya – the eldest daughter – was denied from transfer personal items for Irina in the detention center at Akrestino street. They motivated it by the fact that until a court decision was made, the transfer would not be accepted.

Irina was sent to Akrestino, where she spent a day.

Court decision: send the case materials for revision. Irina was left in jail for 72 hours by a court decision, apparently until they “work better” and make the protocol so that “court” will arrange for a good sleep. The lawyer wrote a statement to change the measure of restraint (in simple words, so that she would not be kept in jail until they proved guilty). It looks like the judge ignored (we’ll know tomorrow).

Chronicle of the trial

Court of the Soviet district of Minsk.
Judge Zhukovich Elena Gennadevna.
The secretary of the court session Namednikova Alina Olegovna.
Irina Sukhy participates in the meeting via Skype and is in the detention center in Akrestino street.

14.45. Relatives, friends, observers are in the courtroom.

A lawyer was admitted.

5 minutes are allocated for communication with a lawyer. Before that there was no possibility of communication.

Irina Sukhy does not admit her guilt and completely disagrees with what is set out in the protocol (participation in the actions on September 3, 2020).

Irina Sukhy claims that she was at the farm that day (200 km from Minsk) with relatives and friends.
On the farm I already had a close friend whom I had known for 30-40 years. We left the city at about 16 o’clock.

The judge asks who she talked to on the phone on the way.

Irina: With brother and friend (Mitek). Before leaving, she was at home with her mother and daughter Anna.

Judge: How old is mom?

Irina: 94 years old and she needs care. I was at the farm with my brother and close friends. I left for two days to rest. I didn’t take any photos, but on the way I paid by credit card and called on my mobile phone. All this can be proved.

Judge: Are there any photos from previous rallies?

The lawyer demands to show the certificate.

The judge does not accept the protest.

“Witness” says that there is a photo of Ira from the rally, the criminal investigation department identified telegrams and VK watched, Women’s March, Ira was in one of the photos says that there was a stream and that is why she was there further report, he did not make detention.

Judge: Why do you think she took part?

“Witness” she was not alone there, you can see everything in the photo. There were non-state attributes that spoke and hid their face.

The lawyer asks questions.
Did you personally draft the report?

“Witness”: I don’t know for sure, but the sound came from the crowd.

The audience laughs out loud.

The “witness” explains that “this woman is well known to us”. There was “In a coat and with a flag”.

Lawyer: on what date was the detention decision made?

“Witness”: I don’t know. Drew up a report and that’s all, others detained.

Lawyer. Question to Irina: Where is the witness who spoke now?

Irina: in the hallway with an open door.

Lawyer: Do you have a white-red-white flag?

Daughter Anna is summoned for questioning.

Judge: Where was mom?

Witness. Daughter Anna. Mom was at home with me and grandma, she was going to go to the farm at 14:00, was going to go with Victoria Kharitonova. I called my mother at 6-7 and my mother said that she was already in Komarovo 160 km from Minsk. Returned from the farm on Saturday evening. Did not participate in the rally on the September 3.

Judge: How is it formalized that you are caring for your mother?

Witness: Victoria Kharitonova says that she was traveling with Ira from home, the trip was agreed earlier.
Left Minsk at 15 o’clock. Refueled on a100 gas station and drove to Jusk shop and then to the farm. We were in Komarovo at 7:15 because I paid there. She called Mitek on the way to, there was no water on the farm, and we were solving this issue. We were already driving from Komarovo with Ira’s brother, he met us there. In Jusk Ira paid with her card and at a gas station. Everything can be checked.

Witness: Igor Korzun (Mitek) at 12 spoke with Ira, warned that she was leaving later then at 16 o’clock, they were on the road. No photos were taken on the farm.

Judge: How many times have you talked Spetmber 3 by phone?

Lawyer: Have you seen Ira on September 3?

Witness: Yes, for two weeks we lived in the same apartment and on the 3rd we prepared breakfast. After that we went to the farm, in different cars. We met between 18-19 hours in Komarovo. Bought food and water in the store and went to the farm.

Judge: Where was Igor Korzun?

Witness: He already been to our farm.

Judge: Is there a photo shared with the farm?

Judge: Why did you call Ira on the 3rd (before that they said that there was no water).

Witness: Warned that there was no water and asked to buy drinking water on the way. You have a very strange question!

The audience laughs out loud.

Judge: There is no well in the village?

Witness: There is, but bad now is the first thing. The pump in the well is not working. And the water fell heavily due to the dry summer.

The interviewing of witnesses is over.

Judge: Why are you holding posters?

Judge: When was the photo taken?

Irina: If you watched fb, then the date is there.

Judge: shows the photo and asks if it is.

Irina: Photo from the day of the end of World War II, September 2.

Lawyer: Protests issues that are not relevant to September 3rd.

The court re-summons Ivan Sukhy as a witness.

Witness: Ivan Sukhiy says that the photo submitted by the court is a joint photo of Irina and Ivan, which was taken on August 31, 2020.

The lawyer filed an application to change the preventive measure.

That’s all for now.

Many thanks to everyone who was in the

The event was dedicated to the topic "Critical thinking through Media Literacy and Active Participation".

The way I see my contribution to RADA's work is all-round support for young people in expressing themselves, engaging actively, representing their interests and protecting their rights not only at national level, but also in cooperation with the international community.

20 / Nov.
RADA met with the Head of the Delegation of the European Union in Belarus Mr. Dirk Schuebel.

Thanks for the invitation!