Belarusian National Youth Council “RADA” appealed to the UN Human Rights Council Special Rapporteur on Belarus – Ms. Anais Marin. RADA express our perplexity and indignation at the arrest of a member of our member organization – Darya Skorokhod, President of the European Youth Parliament in Belarus. 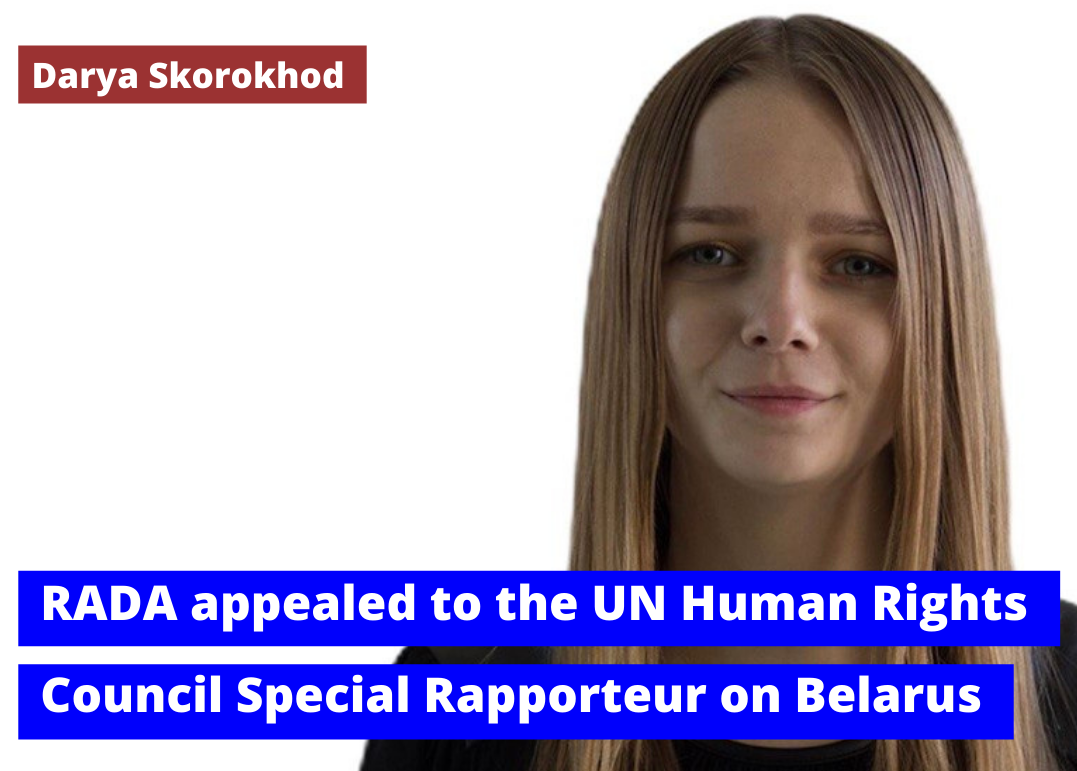 Dasha was detained by people in black uniforms, without any explanation being provided. Then under threats of being beaten, she was forced to unlock a cell phone. Without any explanation, she was kept in a special transport cell for more than 5 hours and was not given food or water. After she was brought to the police station, threats of rape began and guys were severely beaten. Dasha stayed at the police station for more than 13 hours, and threats to her life were constantly heard. Dasha was brutally yanked in the hair and hit in the face for attempting to explain her arrest.

After all, she was taken to a prison where an unknown judge passed a sentence and everyone was forced to accept guilt as if you don’t accept it you would be beaten later. The prison cells were overcrowded, with cells that were designed for 4 people being filled with more than 40 people. The next day Dasha was taken to a police investigator, where she was forced to sign a paper, which would expose her to criminal responsibility if she was detained again. After almost three days from the arrest Dasha was released without being given any personal belongings including her passport or apartment keys, and was told to run if she wanted to live.

Belarusian National Youth Council “RADA” stand in solidarity with Dasha, all our member of members organizations!!!

You can also watch her interview about the terrible detention on TV Chanel «TVRain» (in Russian).

RADA considers such actions of internal affairs officers and special services illegal, inhumane and criminal against civilians of Belarus.

We ask to consider the first alternative report on youth rights in Belarus to the UN Human Rights Council prepared by RADA in 2020.

IJAB spoke to Marharyta Vorykhava of the European Youth Parliament and member of the board of RADA.