How Uladzimer Bulauski was tried?

Uladzimer Bulauski was detained on September 11. Two protocols of part 1 of article 23.34 of the Administrative Code of the Republic of Belarus (participation in a mass unauthorized event) for his participation in peaceful marches on August 10 and 21 in Vitebsk were compiled on Uladzimer. 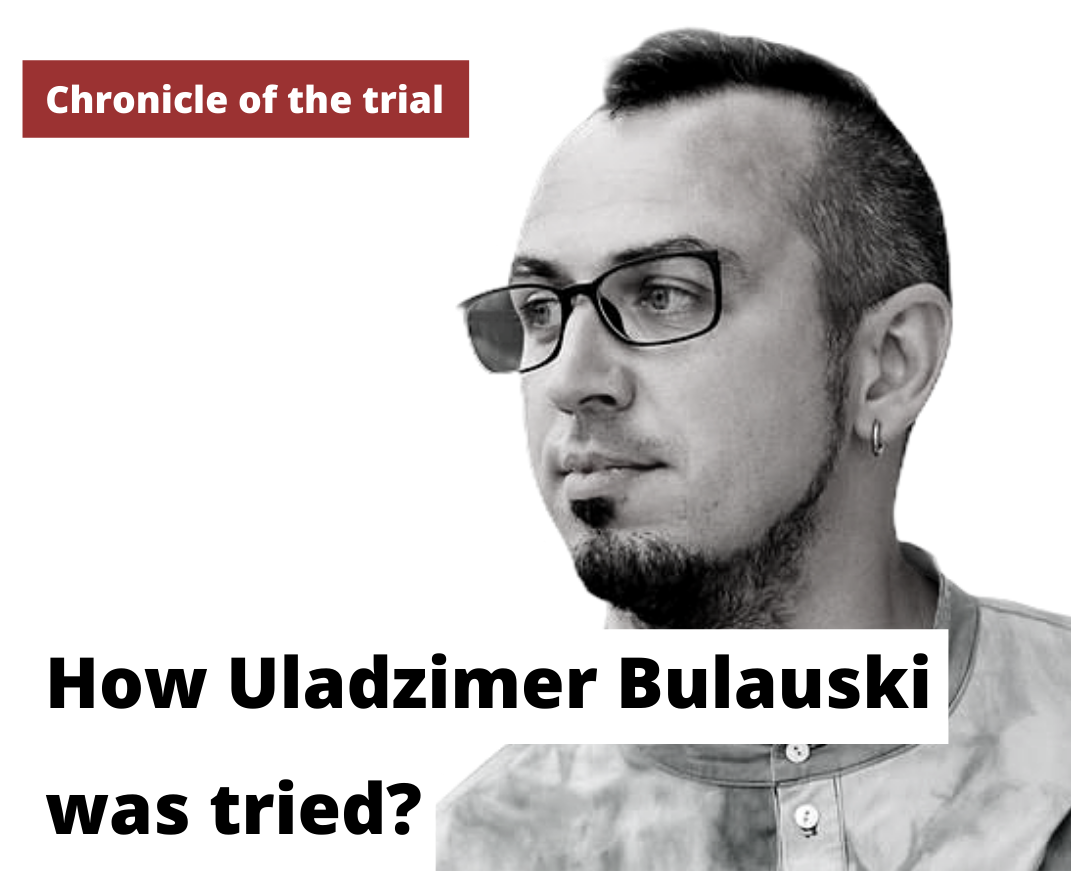 Chronicle of the trial

The court of Oktyabrsky district of Vitebsk.
Judge Inna Grabovskaya. (Инна Грабовская)
Uladzimer refused the assistance of an attorney.
Uladzimer Bulauski takes part in the trial session via Skype; he is kept in the temporary detention center (prison) in Vitebsk.

The judge warns of responsibility for violation of order in the room before the trial and recalls responsibility. He asks to turn off his mobile devices, recording is prohibited.

The judge: The court session will be considered by Skype.

The case of an administrative offence against Uladzimer Bulauski, who with a group of people 10/08/2020 at 22:30 at 60a Moskovskaya Avenue (Vitsebsk) at a public transport stop, violated public order and the Law on Mass Events, shouted slogans “Live long Belarus”, “Shame” and “Lukashenko go away”, clapped his hands to express disagreement with the election results.

The judge read out the first Protocol of 21/08/2020 on participation in an unauthorized street procession on Suvorov and Tolostoy St. in Vitebsk, played the drum. Near were white-red-white flags.

In both cases, the judge calls the responsibility in accordance with Art. 23.34 Part 1 of the Administrative Code.

Judge: Uladzimer Igorevich Bulauski, do you understand the protocols?

Uladzimer (answers in Belarusian): I do not agree with the first protocol and can explain.

Judge: What is your relationship to protocols? Do you plead guilty?

Uladzimer: Not guilty under the first protocol. According to the second protocol, Article 33 of the Constitution (of the Republic of Belarus) gives me the right to freedom of peaceful demonstrations and expression of opinions.

Judge: Let’s be factual. Clarify the circumstances on the record?

Uladzimer: 10/08/2020 my friends and I were sitting at a stop waiting for a bus to leave for the city center. Two cars (police bus) arrived and detained us and took us to the police station. I did not participate in any other events on that day. There are at least two witnesses who were close to me. A protocol was drawn up for them too, which they did not sign.

Judge: So, where were you during this period?

Judge: Were you at 60a Moskovskaya Avenue? Do you deny it?

Judge: For what purpose were you there?

Uladzimer: We were waiting for bus #34.

Judge: Have you seen any marches or rallies nearby?

Uladzimer: There was no rally at the stop.

The judge moves on to the second protocol and asks for clarification of where he was.

Uladzimer: Yes, I was at the specified address, played the drum, participated in a peaceful procession.

Judge: Don’t you deny that you took part in the procession along Suvorovo, Tolstoy and other streets?

Uladzimer: I do not deny it.

Judge: For what purpose were you there?

Uladzimer: Played the drum, walked in a peaceful procession.

Judge: As for movement on the streets of Suvorov, Tolskogo, Zamkova? Do you deny participation in a street march?

Uladzimer: No, I do not deny it.

Judge: For what purpose? Did you travel in the company of citizens who held flags?

Judge: What purpose did they do it for? Was it related to the elections?

Uladzimer: I have not heard such a thing.

Judge: Was there permission to hold the rally? (quick to reformulate the question) Did you apply or who was with you for permission?

Uladzimer: I do not know.

Judge: So you did not apply in person?

Uladzimer: I did not apply for permission, as I was not the organizer of the peaceful procession.

Judge: Who was it? Do you know?

Uladzimer: People themselves gathered and went, there were no organizers.

Judge: That is, the circumstances described you recognize, but do not recognize participation in an unauthorized event? Or in what?

Judge: So, you do not deny that you took part in the violation of the Law?

Uladzimer: If to speak like you, I do not deny it.

Uladzimer: Yes, I was detained for the first time according to an invented protocol, then the second protocol was drawn up. I think that this is political pressure.

Judge: Do you still have protocols with regard to you under this article? How often have you participated in such mass events?

Uladzimer: In Vitebsk on the specified date.

Judge: And in other cities?

Uladzimer: Did not participate.

Judge: reads that the report was made by inspector Pravich (not clearly heard), indicates that the police officers repeatedly pointed to the illegal event.

Uladzimir says once again that he hears nothing and communication is interrupted. Also points to the fact that the report has already written «10/08/2020 we had coffee in the cafe, later went to a bus stop. Two cars arrived, of which 8 people came out in an incomprehensible form, did not introduce themselves and began to detain us without explaining the reasons. Then we were taken to the police station. We did not shout slogans and did not have any flags on us».

Judge: Are these your explanations on the record?

Judge: You were detained at 22:30 and released? That is less than 3 hours later you were released? (According to the Law, you can be detained for not more than 3 hours).

Uladzimer: Yes, at this time I was detained. No, I was held for more than three hours (3.5 hours). The chief of police had a conversation with me yet.

The judge then read out the second report of the police officer Yaroshevsky, who found on videotape that he had identified Bulavsky, who played the drum and shouted slogans “Live Belarus,” “Shame” and “Lukashenko go away.

Judge: Did you see yourself on the screenshot? Did you recognize yourself and play the drum?

Uladzimer: Yes, but the slogans were only “Live Belarus”.

Judge: Do you need to watch this video?

There are questions in the court room whether it is also possible to watch the video – the judge threatens that those present may leave the court.

The judge: Do you recognize yourself on this video?

Uladzimer: It is not clear what you are showing there.

Judge: We can’t do anything else, but you can see it on the video. Screenshot from this recording. Recognize yourself?

Uladzimer: Yes, of course. 17/08/2020 at a meeting with Vitebsk citizens the head of the regional executive committee “gave his word that peaceful demonstrators would not be detained in the streets” and peaceful citizens used their constitutional right.

The judge read out from the report that Vladimir also carried leaflets.

Uladzimer: I did not carry.

The judge reads the case further.

Uladzimer: I want to see the case file.

Judge: You have the right, write a complaint (it should be noted that Vladimir is in prison). What else can you say?

Uladzimer: Yes, everyone has the right to a peaceful protest.

The judge makes a decision:

Judge: You were arrested in another case, not that which is under consideration today.

The YO!Fest is the annual political, musical, youth-led festival of the European Youth Forum.

Webinar with Miklós Haraszti who served as the OSCE Representative on Freedom of the Media and was the UN Special Rapporteur on the situation of human rights in Belarus.