We, the union of twenty seven democratic youth organizations of Belarus, being created with the purpose of consolidating of youth organizations and initiatives of Belarus for representation, promotion and defending common interests, exercising right to freedoms of association and other constitutional rights, represented by the Governing Body – the Board of “RADA”, make the following appeal: 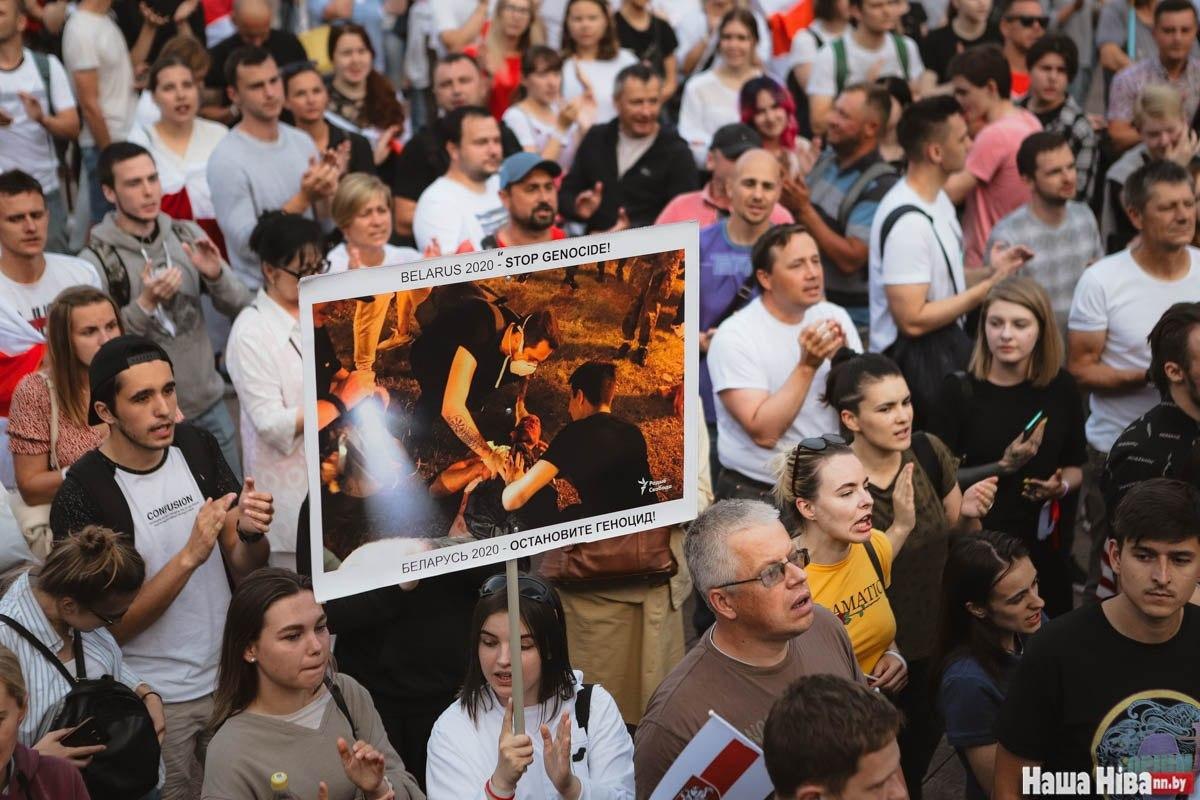 From August 9 to 17, according to official data, more than 7,000 people were detained in Belarus throughout the country, most of whom are young people, including underaged. All this time we have been receiving evidence of inhuman treatment and tortures from employees of the internal affairs bodies and internal troops in relation to participants of peaceful actions detained in closed institutions of the Ministry of Internal Affairs. Also, we receive facts of refusal to provide medical assistance to detained, at the time of isolation in closed institutions.

Belarusian and international human rights organizations and volunteers are right now working on documenting and fixing facts of torture and ill-treatment of citizens by officials from internal affairs bodies, which were used both in the process of detaining people on the streets and in houses, and during their stay in closed institutions. Despite the fact that many are afraid to talk about what happened, and the most terrible facts of torture may be recorded later, it must be said that minors, women, elderly people, athletes, and foreign citizens experienced inhuman treatment and violence. There is also video evidence of physical violence against the arrested, and people talk about the facts of arbitrary detention by the police.

The seriousness of the torture and humiliation is evidenced by the fact that almost 60 people were taken to the Military Hospital of Minsk alone, to the center of a gunshot injury. These facts are also documented by volunteers and human rights defenders and we hope that very soon their work will become the basis for an open and fair investigation, and the perpetrators will be punished.

Also, we know that under the use of force and torture humiliating human dignity, the detainees were accused of obtaining foreign funding to participate in peaceful protests, and threatened with criminal responsibility for organizing mass riots. Some of the detainees were forced to give false testimony on camera, which was later used on the broadcast of the official TV channel Belarus-1, in order to discredit demonstators and deliberately mislead viewers.

We condemn and cannot find any justification for the use of physical violence by officials against detained and unarmed people in peacetime, based on discrimination.

In all this situation, Minister of Internal Affairs and Minister of Health of the Republic of Belarus, under the pressure of many facts and evidence, made statements in which they regarded what was happening as an ordinary situation.

To understand better the true attitude of officials towards people, it is important to mention that along with the groans that were still heard from behind the walls of the isolation wards, where the detainees were, on August 13, more than 300 police officers of various levels were awarded “for impeccable service.”

Under pressure from peaceful demonstrators, international community and civil society organizations, most of the detainees were released from their illegal detention facilities.

At the same time, in addition to those detained in administrative cases, at the moment we know of at least 13 detainees in criminal cases, accused under Articles 293 (Riots) and 342 (Organization and preparation of actions that grossly violate public order, or active participation in them) of the Criminal Code of the Republic of Belarus. We fear that, under the current conditions, these detainees may also be subjected to torture and in order to induce them to give false testimony. In addition, the described criminal cases can certainly be considered politicized and have no other basis.

We are glad to note that among the employees of the Ministry of Internal Affairs there are people for whom the honor and protection of their people is not an empty phrase. Some of them resigned and some openly say that the ideological work before the elections was originally carried out with an idea to intimidate employees of the internal affairs bodies and internal troops in order to provoke them into brutal behavior in relation to peaceful protests.

We note with great enthusiasm a huge wave of solidarity and mutual assistance in the Belarusian society, youth and democratic youth organizations who do not stand aside and actively participate in all processes associated with the events described. We are very grateful to the people who provide support to the victims by any available means, as well as the international community that supports the will of the Belarusian people, and not supporters of cruel and inhuman repressions. 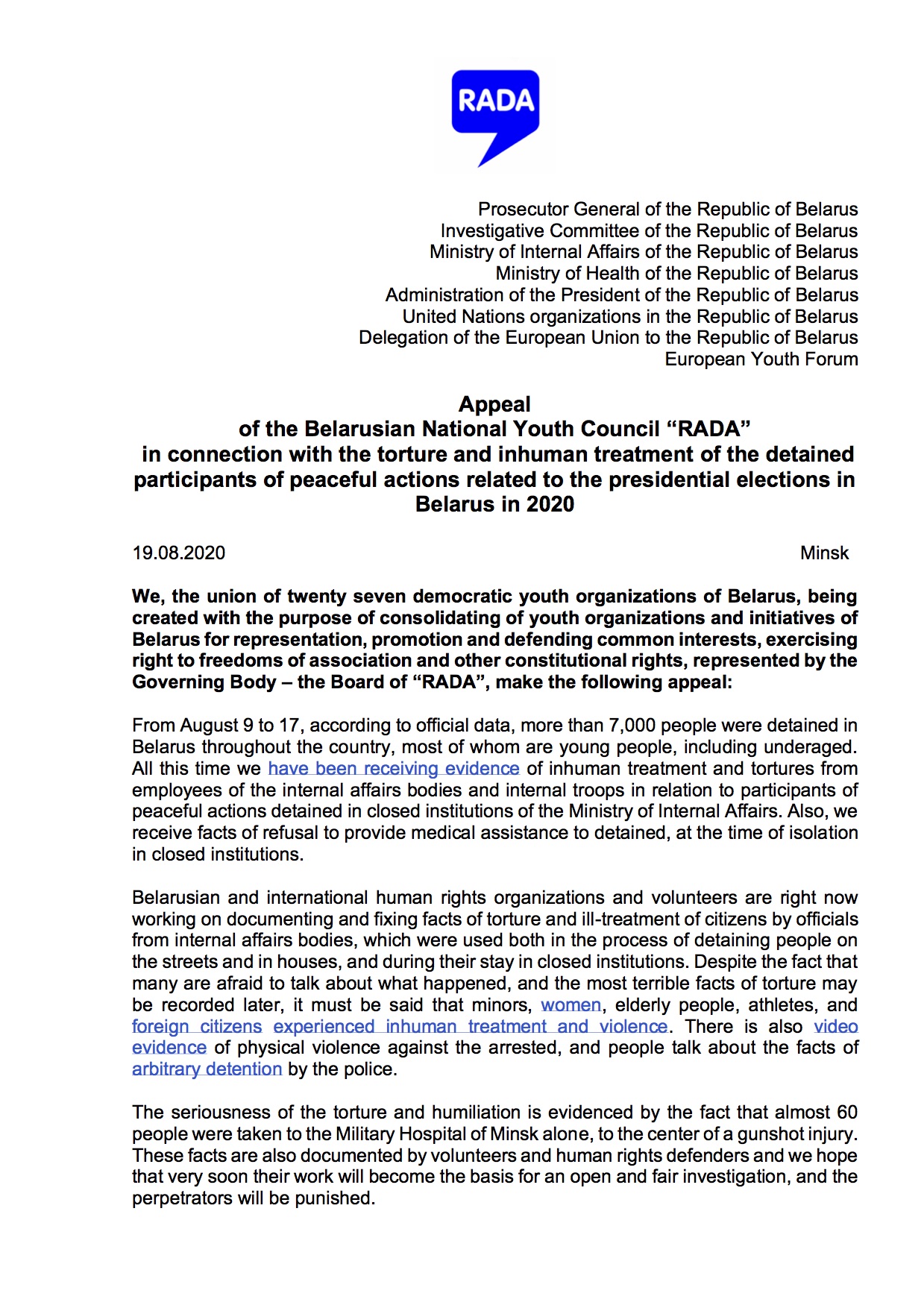 International Secretary of RADA will present a report on youth tights in Belarus on Intersessional Seminar on Youth and Human Rights.

IJAB spoke to Marharyta Vorykhava of the European Youth Parliament and member of the board of RADA.

09 / Sep.
How Stanislava Gusakova was tried?

22 / Sep.
“Human rights are not an internal matter”