We, the union of twenty eight democratic youth organizations of Belarus, being created with the purpose of consolidating of youth organizations and initiatives of Belarus for representation, promotion and defending common interests, exercising right to freedoms of association and other constitutional rights, represented by the Governing Body – the Board of “RADA”, make the following statement:

The VI All-Belarusian People’s Assembly (APA) is to take place in Minsk on February 11-12. 2,700 Belarusians will gather in the Palace of the Republic during the epidemiological and political crisis in the society. The official sufficient reasons for this risk for the participants of the APA are the consideration and adoption of the “Basic Provisions of the Program of Socio-Economic Development of the Country for 2021-2025 and Directions of Socio-Political Development”.

The first thing to note is the irrelevance of the proposed agenda of the APA: according to the organizers, the list of important issues of socio-political development does not include any political or epidemiological crises of 2020. It is also a misunderstanding that the “Basic Provisions” do not contain up-to-date data and forecasts on the impact of the above-mentioned crises on the life of the society. The document assigns a passive and reactive role to young people as objects of “patriotic education”. Although participation in social and political life is mentioned, it does not have any definite forms, which does not solve long-standing issues of development and self-realization of the youth of Belarus.

We have to state that the APA, which is presented by the authorities as a platform for dialogue, is in fact a meeting of the closest supporters of the government at the expense of state funding.

Of the 2,700 participants, there will be none of those who by their actions and words represent an alternative to power, as well as those who raise important questions for the society.

We also believe that the APA is an attempt to divert attention from current issues and fulfilling the 3 main demands of society after August 9, 2020: holding new elections, releasing political prisoners and investigating cases of torture and violence, unconditionally and immediately. 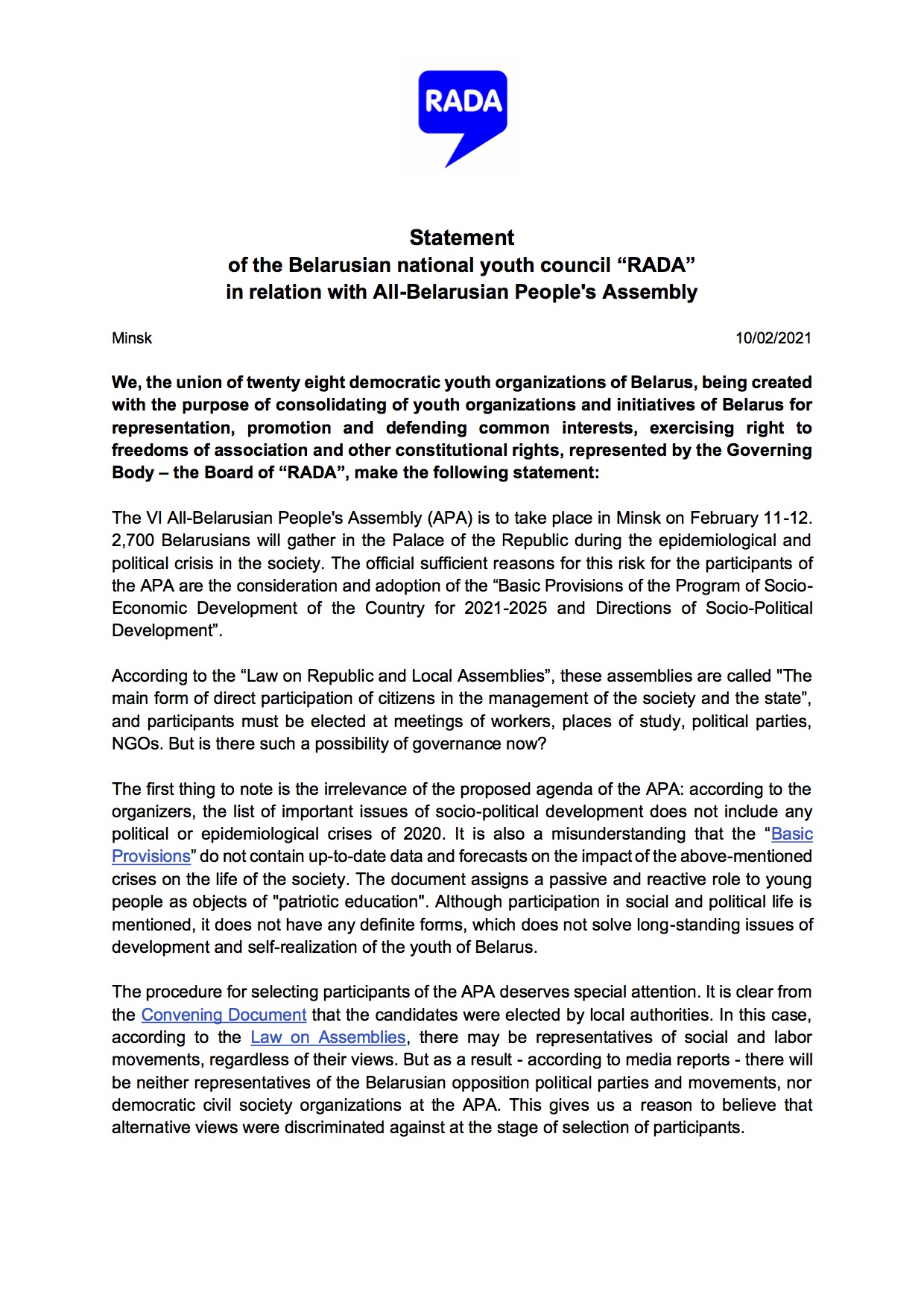 19 / Aug.
Appeal of the “RADA” in connection with the torture and inhuman treatment of the detained participants of peaceful actions related to the presidential elections in Belarus in 2020
30 / Jan.
The Economic and Social Council (ECOSOC) Youth Forum

30 / Sep.
“A country’s problems are the world’s problems”

Belarus from the perspective of a long-term volunteer.