We, the union of twenty eight democratic youth organizations of Belarus, being created with the purpose of consolidating of youth organizations and initiatives of Belarus for representation, promotion and defending common interests, exercising right to freedoms of association and other constitutional rights, represented by the Governing Body – the Board of “RADA”, make the following statement:

Since August 9, there were more than 20,000 detained people among those who took to the streets of Belarusian cities to exercise their rights to freedom of expression and peaceful assembly, guaranteed by the Constitution and the International Covenant on Civil and Political Rights. These violations are large-scale, and we drew attention to this in our last statement, dated November 2, but during the last two weeks we have observed a new wave of pressure directed against youth organizations and initiatives.

So, on the night of November 1, riot police officers broke into a private event in a private house where representatives of the LGBTQ + community were present, searched and intimidated the participants of the event. All participants were detained for 7 hours, tested for drugs, drawn up protocols on drug use and drug trafficking, and unreasonably threatened to initiate a criminal case on drug trafficking, that were not found in the house and during the tests. At the moment, all detainees are free.

On November 12, 7 members of the “Belarusian Students’ Association” had searches at their living places, as well as in their office. For 5 people – Ksenia Syramalot, Alana Gebremariam, Yegor Kanetsky, Yana Arabeyko and Kasya Budko – the searches ended with the arrest and placement in the KGB detention center as suspects in a criminal case (Art. 342 of the Criminal Code). Lawyers were allowed to visit them only the next day.

On November 16, after knocking out the doors of the apartment where Viktor Klimus – member of Brest organization “Grunt” lives, representatives of the Investigative Committee conducted a search. At the moment when the door was knocked out, Viktor was not in the apartment, but his wife and small child were there. 2 flags and a computer were confiscated.

All these cases occurred within a short span of time and indicate that members of youth organizations have become targets of persecution.

We are outraged by these events and regard them as deliberate persecution of representatives of youth organizations for their active civil position, which is a violation of the Constitution and the International covenant on civil and political rights. We view this situation as an aggressive, one-sided, unconstructive and failed attempt by the state authorities to respond to the civil activism of young people caused by election fraud, violence in the actions of law enforcement agencies and politically motivated repressions.

In this regard, we: 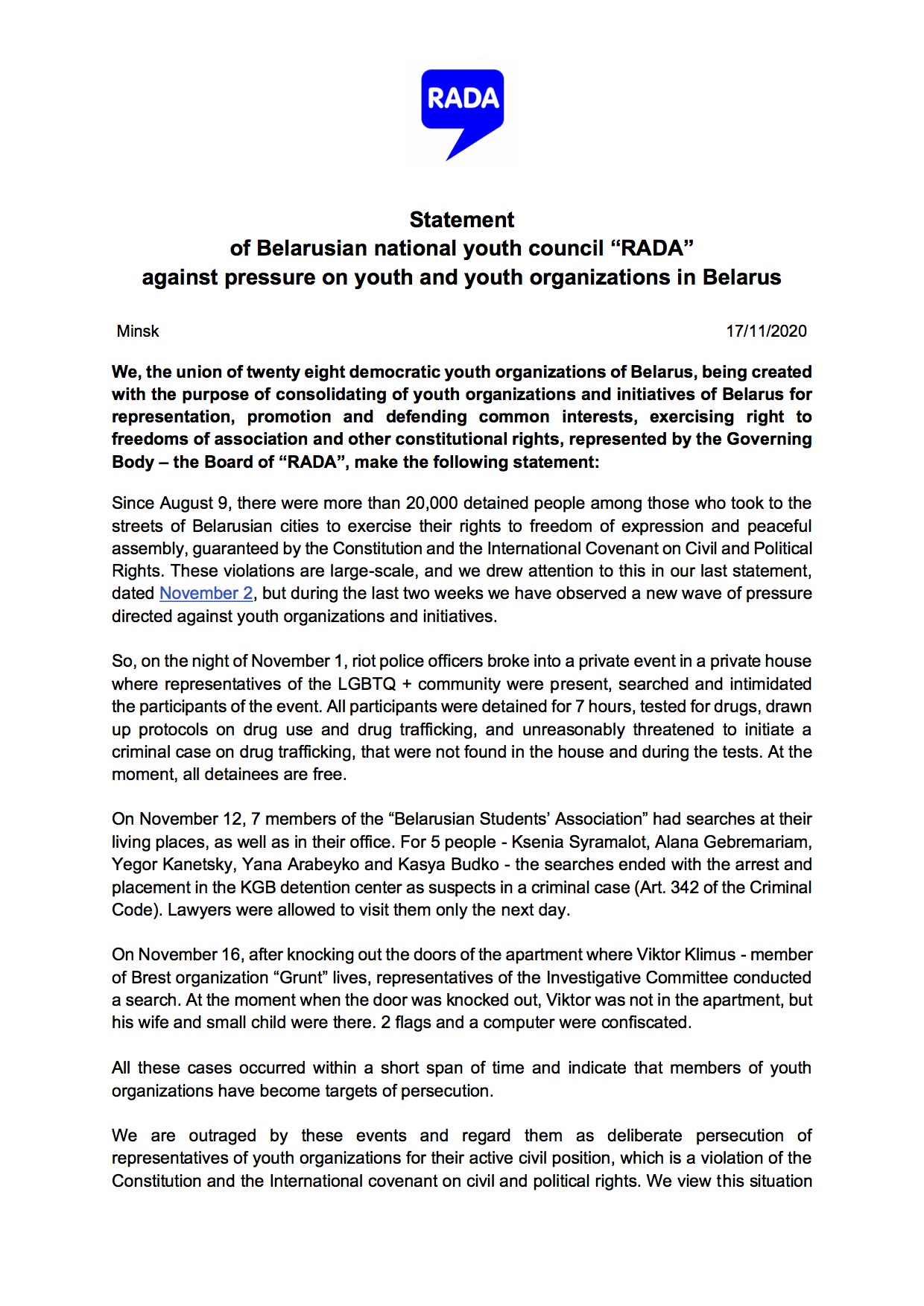 We call on all concerned people to show their solidarity with the victims of this unjust sentence, their families, and to take part in the activities carried out by the BSA in their support.

The deadline for submitting applications is 17 February 2020.

16 / Sep.
How Uladzimer Bulauski was tried?