Statement of the Belarusian National Youth Council of the “RADA”

We, the union of twenty seven democratic youth organizations of Belarus, created with the purpose of consolidating of youth organizations and initiatives of Belarus for representation, promotion and defending common interests, exercising right to freedoms of association and other constitutional rights, represented by the Governing Body – the Board of “RADA”, make the following statement:

We note with great concern a gigantic increase of aggression in society, caused by numerous violations and barriers from authorities to the people of Belarus in realization of their rights and freedoms during electoral campaign 2020.

We pay special attention to the fact that young people make up a significant part of the participants of peaceful assemblies in Belarus. We are proud and glad that Belarusian youth is actively seeking opportunities for a peaceful and democratic demonstration of their views. And we protest against aggressive, disproportionate and undemocratic methods used by the Belarusian authorities and their supporters.

At the same time, despite the statements of the RADA, Belarusian and international organizations adopted in May and caused by the previous wave of repressions, Belarusian authorities did not stop neglecting the rights and freedoms of citizens but began to apply even larger range of repressive tactics, including manipulative ideological methods in this list and mass detentions of participants of peaceful and permitted assemblies.

We regret that young people are becoming victims of ideological propaganda and political manipulation and are actively provoked to act aggressively. So, young people, who participated in the picket to collect signatures for nomination of a candidate Lukashenko, attacked and blocked the work of Radio Liberty journalists.

Considering all mentioned, we express our support to all participants of peaceful assemblies in Belarus who openly exercise their rights, and also express solidarity with those who were detained for political reasons.

We express our protest against violation of human rights and the disproportionate use of force by officers of the internal affairs bodies against participants of peaceful assemblies in Belarus.

We call on Belarusian authorities to release immediately representatives of the presidential candidates’ headquarters detained on politically motivated grounds; and to ensure holding of fair and democratic elections according to international standards.

Read the full text of the Statement here. 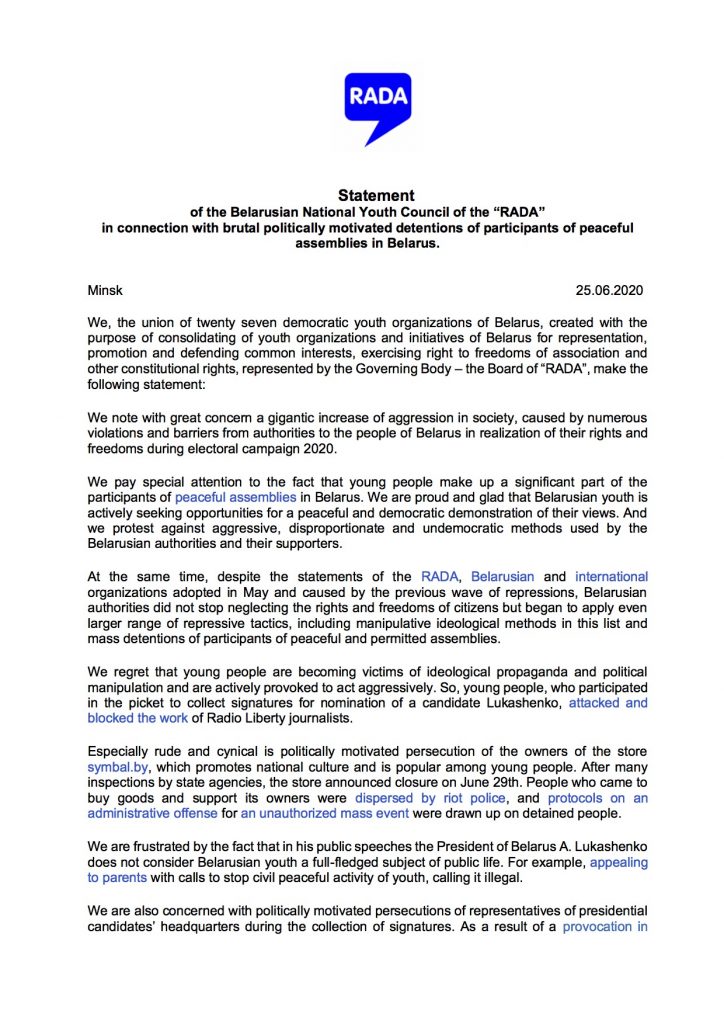 Similar reads
25 / Nov.
Sofia Terentyevа, a Board member of RADA, was detained

17 / Nov.
Students in Belarus stand up against repression

Freedom of speech is fundamental in a democratic society. The alarming situation in Belarus is a reminder to stand up for this right, writes two IMS student interns in a blog.