Yesterday the whole World witnessed and was very worried about the fate of more than 100 passengers of the Ryanair aircraft of Athens – Vilnius direction. It was flying on a route within the EU but was intercepted in the airspace of Belarus and stayed at the Minsk National Airport for 7 hours. All this time, people have been held hostage by a regime that systematically violates human rights, and the fate of two young people are still in jeopardy.

We condemn politically motivated hunting by the state authorities of Belarus on people and the risk to the lives of citizens of other countries. We are very worried about the consequences for the detainees Roman Protasevich (26 years old) and Sofia Sapega (23 years old) in Belarus. So far, their families and lawyers have not been given the opportunity to meet, and there is no information at all about Sofia: where is she, what are the grounds for her detention and what is her status.

We remind you that Belarusian authorities included Roman Protasevich in the list of organizations and individuals involved in terrorist activities. In this regard, Protasevich faces at least up to 15 years in prison.

Moreover, Roman is a colleague and friend of political prisoner Ihar Losik, who has been in prison for almost a year (since June 25, 2020) and who was tortured. We are sure that Roman will also be tortured to obtain witnesses about the information channels in which he was involved. This is extremely unacceptable and is prohibited by a number of international documents that Belarus must comply with.

Yesterday’s actions of the Belarusian authorities once again showed the World that the current political regime in Belarus does not respect human rights and acts contrary to international agreements, destroying its credibility inside the country and abroad.

In this regard, we: 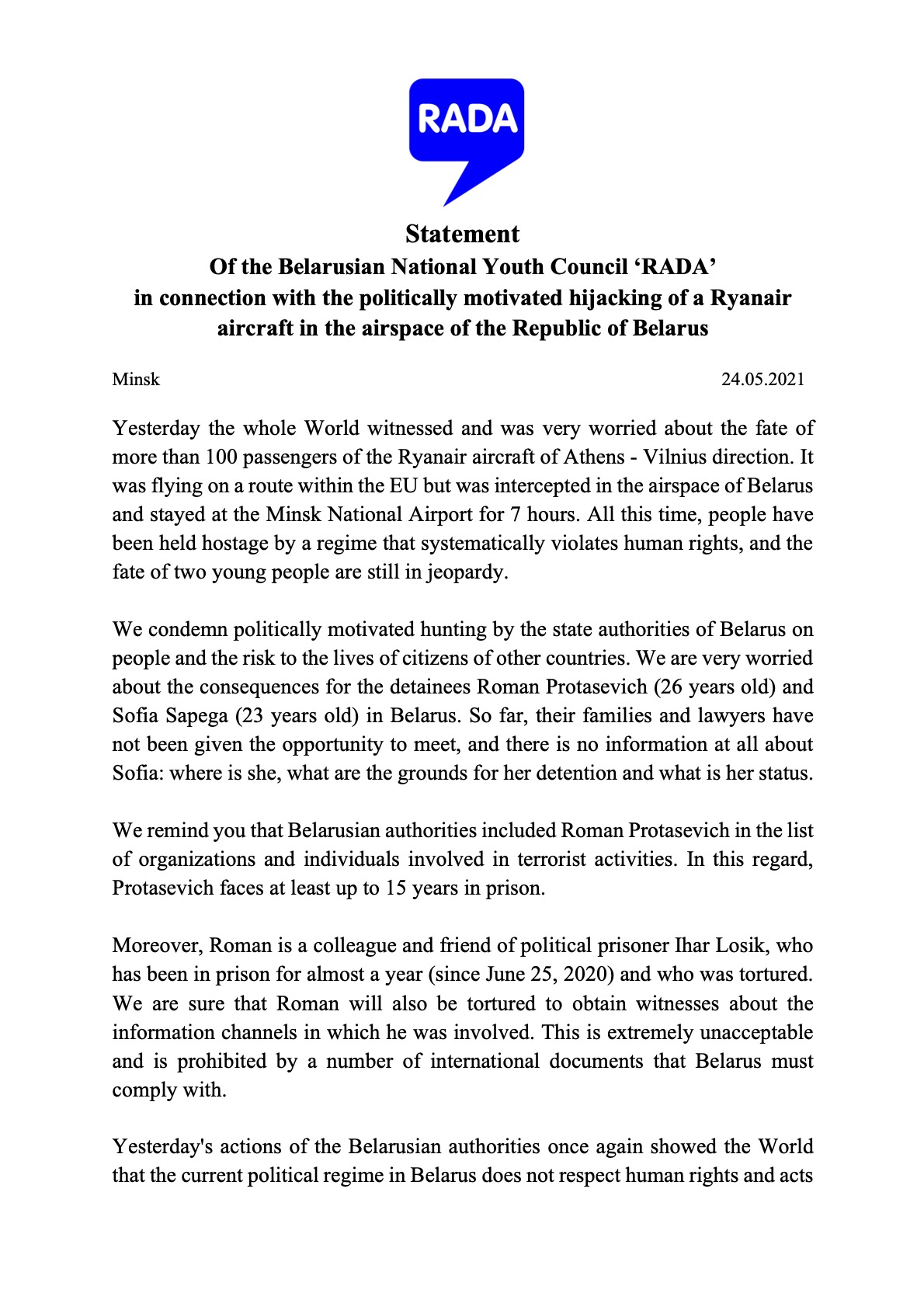 We, the union of twenty democratic youth organizations of Belarus, being created with the purpose of consolidating of youth organizations and initiatives of Belarus for representation, promotion and defending common interests, exercising right to freedoms of association and other constitutional rights, represented by the Governing Body – the Board of “RADA”, express our deep indignation and rejection of the recent repressive actions of the officials and law enforcement agencies of the Republic of Belarus related to the detentions and punishments of participants of numerous peaceful protest actions.

19 / Nov.
Statement of the “RADA” against pressure on youth and youth organizations in Belarus

Since August 9, there were more than 20,000 detained people among those who took to the streets of Belarusian cities to exercise their rights to freedom of expression and peaceful assembly.

28 / Mar.
Statement condemning the detention of participants of peaceful protest actions against Decree No.3 of the President of the Republic of Belarus